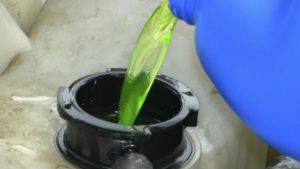 Ethylene glycol, the primary active ingredient in antifreeze, is toxic to animals and humans, and chemicals added to prevent rust and corrosion increase its toxicity. Byproduct heavy metals like lead, cadmium, chromium and benzene also can be found in used antifreeze – sometimes in levels high enough to be considered a hazardous waste, which means in certain cases, dumping antifreeze is not only irresponsible – it’s illegal.

Antifreeze that’s dumped on land or in drains or sewer systems eventually ends up in groundwater, polluting drinking water, as well as rivers and streams.

Recycling or responsibly disposing of your used antifreeze is an intelligent, responsible, and simple decision. January Environmental can provide a tank, or collect glycol from your drums or tanks. We’ll work with you to determine the most effective solution for you and your company.

Upon collection, the used antifreeze is segregated into separate storage tanks at January Environmental’s facility for initial processing. Then, it is sent to a specialized treatment plant, where it is filtered and distilled to remove contaminants and recover reusable ethylene glycol. The clean ethylene glycol is treated and restored to optimal performance levels, and processed back into usable antifreeze.

Contact January Environmental today to learn about our packages for collecting, recycling and disposing your used antifreeze. Our recycling and sustainability initiatives can maximize production, reduce your environmental footprint, and save you money.

We can also provide a single solution for glycol, oil, absorbents, filters, and waste water. Let us create a custom suite of service for you.